Bert was in town from very late Wednesday night until just a couple of hours ago, helping me to paint the two largest rooms of my apartment. It was a blast, and our leisurely schedule and the longish nature of his visit meant that we weren't hard at work for very much of that time, but instead had hours in which to lounge around, investigate local museums and bars, and reconnect with a pair of old college friends--who now live, as it happens, only some three miles away.

As sorry as I am to be separated from most of my friends in this new location, there's something so lovely about the long, one-on-one visit. There's just so much TIME: so many long walks, so many meals, and so many nights of staying up until 3 a.m. drinking and playing board games. In some ways, it's better than living in the same city with someone but only seeing him or her every couple of weeks, and only for a couple of hours at a time.

I'll be painting my study later in the summer, but for now, here are photos of my bedroom and living room: 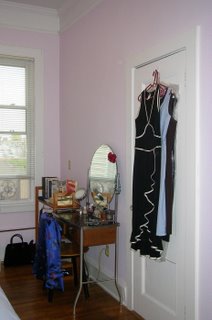 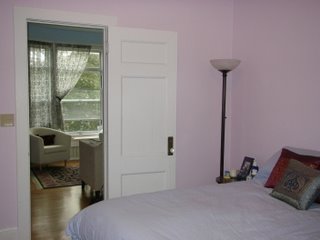 The color in the bedroom is hard to describe and harder to capture on film. It's a pale mauve, but in some lights it looks very pink, in others lilac. I'm decidedly NOT a pink person--but I really like the blue undertones, and it goes well with the living room: 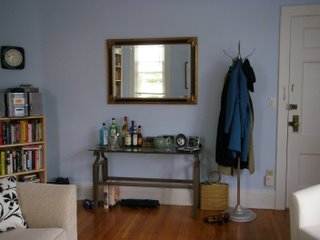 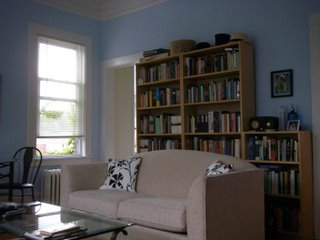 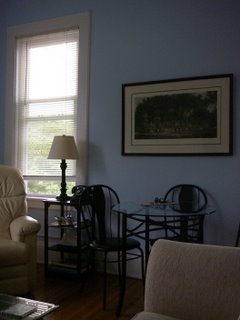 I've wanted to live in a blue-painted space for as long as I can remember, but I convinced myself that doing the entire apartment in that color would be overkill. I'm now a little surprised to find that I'm living in a pastel world, since I own, well, nothing in pastel. (However, I s'pose it makes a nice backdrop for all my black and grey clothes.)

And as Bert pointed out, these are very island-y colors, and as such may help to cheer me up during the long, grey winters.
Posted by Flavia at 9:24 PM

So pretty! My bathroom sounds like it is the same color as your bedroom (and I'm not a "pink" person either).

What a gorgeous space! The blue is beautiful and I love your hardwood floors.

How gorgeous! All your stuff looks wonderful (I love the curvy white chair).

Very pretty! I like the little table in the last picture. Is it like the breakfast nook?

And Ianqui: it's the everything-dining nook. I hope to get a larger glass top soon, so that the table can plausibly seat 4 for a meal.

I second NK -- that curvy white chair is fabulous.

How lovely! And how inspiring for me; if you settled in so very well, perhaps the same will eventually happen for me!

I'm SO jealous of your non-white painted walls! I love the blue...

Flavia - Somehow I missed these when you first posted them. What a lovely, lovely place! I especially love the blue living room.