As it turns out, there are still birthdays after forty. 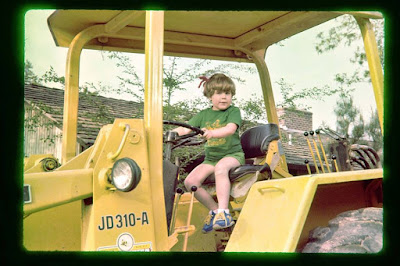 But not to worry. Young Flavia's got it all under control.
Posted by Flavia at 7:00 AM 6 comments:

Although I'm a hopeless looker-backward and easily prone to nostalgia, I'm not much one for regret. Sure, I might regret that I said X or Y and hurt someone's feeling--I do regret that kind of thing, rather often--but I've never regretted a life choice and rarely even dwell on the alternate paths that once seemed open.

Lately, there have been a few exceptions.

Earlier this winter I spent a weekend working with a colleague in a city and a state I'd never visited. At some point over the weekend I remembered--suddenly, and with force--that I'd applied to the law school at the neighboring university. In fact, I was accepted, and even offered a scholarship to do a combined J.D. and M.A. in English. Both the law school and the English department are terrific, and at some point the joint degree had seemed like an elegant solution: I could continue my literary studies while also doing something more practical.

But it also hadn't felt like a real place to me. I'd thought that I could see myself in law school--I had other friends at other programs--but I hadn't gotten into the three or four more prestigious and more proximate programs I'd applied to. An M.A. at my alma mater, though; that I could visualize. And I figured law school would still be waiting if I wanted it. (And as it turns out, I didn't.)

I've never forgotten that I applied to law school, but I tend to think of my applications as a bit of unserious casting about: the kind of thing you do when you're twenty-three and don't have any better ideas. Being in the actual city of that actual university reminded me that I really might have gone. I usually forget the phone conversations I had with current students tasked with recruiting me, or the time spent debating the pros and cons with friends and family. Had I made a different choice (I thought, as we drove around), I could have had a whole relationship with this city, and a whole set of memories and friendships connected to it and the surrounding landscape. I could, even now, be a lawyer.

A university where I was once a finalist for a job has been going through a convulsive and seemingly unending series of scandals. My on-campus interview had been a mixed experience: it was clear that the institution was unhealthy and that the faculty felt alternately besieged and depressed, but everyone in the English department was lovely and the location was deeply attractive. I was trepidatious, but I would have taken the job.

I didn't get it, though. In mid-March I got an unexpected call from RU, which had not interviewed me at MLA, inviting me to do a phone interview, which was followed by a fly-out. RU was such a great fit that for years I'd been grateful I didn't get that earlier job. . . but again, it's not something I've spent much time thinking about.

The recent scandal, though, has made me feel just how near a miss that was. The stories in the press have featured shots of the campus, which have conjured up vivid sensory memories of walking around on a blustery January day, eating in the student union, and being escorted back and forth to interviews. None of the faculty being quoted are people I met, but reading their words made the names of those I did meet pop back into my head. And I saw anew how hangdog or anhedonic they seemed when discussing the place.

At the time, I'd figured I could write my way out if I wasn't happy. But knowing what I know now about my professional savvy in my first few years on the tenure track (and what I know about the job market), I'm skeptical that I would have.

After all, the person they hired instead of me is still there.

Maybe thinking about alternate paths is something one does more as one gets older, but it's also striking that neither of these is a positive vision, or even a misty "oh, what might have been!" Each is, to a different degree, a "holy shit! thank God I didn't do THAT."

And in neither case is the near-miss something on which I can congratulate myself: I just couldn't see myself at that law school, so I went with what felt like the easier option; I had a bad feeling about that job, but the decision not to take it wasn't mine.

Maybe that, too, is a sign of middle age: the grateful but somewhat abashed realization that dumb luck accounts for as much of our lives as reasoned decisions.
Posted by Flavia at 3:07 PM 10 comments:

Email ThisBlogThis!Share to TwitterShare to FacebookShare to Pinterest
Labels: I Grow Old I Grow Old, Personal Shit, Self-Knowledge and the Lack Thereof

At the gym the other day I read Jhumpa Lahiri's "Teach Yourself Italian," an essay about her decades' long obsession with Italian and her intermittent attempts to master it. Since I've been studying Italian for a few years myself--and periodically wondering how serious I am and what the next stage of my studies might be--Lahiri's essay had an obvious appeal. I also liked the way she used her struggles with Italian to reflect on her struggles with English, a language her own mother never mastered and that for Lahiri was always fraught with the possibility of failure.

And yet. . . the essay just wasn't very good. It gestured toward interesting ideas, but the language was flat and unsubtle. It didn't sound like Lahiri or like The New Yorker.

But since I had another 30 minutes on the elliptical machine, I kept reading. Lahiri narrated her move to Italy with her family and her decision to start keeping a journal in Italian. At first her writing was comically bad, but she found it freeing to write without regard for errors. Gradually, it got better. And then abruptly, in the middle of a paragraph, Lahiri declared, "If I mention that I'm writing in a new language these days, many people react negatively. In the United States, some advise me not to do it. They say they don't want to read me translated from a foreign tongue."

Wha--? An idea occurred to me. I glanced down to the end of the article: "translated, from the Italian, by Ann Goldstein."

So that's why its prose was so unlovely, so un-Lahiri.

And then I read this, and something pinged in my head:

I became a writer in English. And then, rather precipitously, I became a famous writer. I received a prize that I was sure I did not deserve, that seemed to me a mistake. Although it was an honor, I remained suspicious of it. I couldn't connect myself to that recognition, and yet it changed my life. Since then, I've been considered a successful author, so I've stopped feeling like an unknown, almost anonymous apprentice. All my writing comes from a place where I feel invisible, inaccessible. But a year after my first book was published I lost my anonymity.

By writing in Italian, I think I am escaping both my failures with regard to English and my success. Italian offers me a very different literary path. As a writer I can demolish myself, I can reconstruct myself. I can join words together and work on sentences without ever being considered an expert. I'm bound to fail when I write in Italian, but, unlike my sense of failure in the past, this doesn't torment or grieve me.

What this sounds like, to me, is a phenomenon I've been interested in for a while now: the gifted person who dismisses and downgrades her talents precisely because they seem to her so easy, or so undeserved--and then, surprisingly often, decides she might have equal success doing something else.

Think about the professional athlete who walks away from one sport to pick up another he hasn't played since high school. Or the singer who desperately wants to be an actor (or vice versa) and is perplexed when success doesn't follow. In some cases, the model-who-thinks-she-can-be-an-actor-can-be-a-singer may just be arrogantly self-confident, living inside a bubble of fame--but in other cases, the kind I'm interested in, the talented person really does have a conflicted relationship to his or her talent and believes that he or she would be happier, in some way, doing something else.

That's something I have real sympathy for. I'm not sure I have any remarkable talents myself, but I'm certainly better at some things than others (and not necessarily the things I would have chosen). I wish I were a good fiction writer, but I'm not. If I were to quit my job tomorrow and spend the next ten years working on a novel. . . well, I could do that, but there's no evidence to suggest I'd succeed. The fact that I'm a pretty good scholar with a pretty good prose style--and that I've been complimented on and rewarded for those things--does not mean I'd be equally valuable as some other kind of writer.

I believe in doing new things, and I'm all for self-exploration and self-expansion. If Italian has given Lahiri a way to write that doesn't trigger the kind of anxiety and self-doubt she felt in English, that's terrific, and I wish her well. But though she writes better Italian than I ever will, it's in English that she has a notable talent (and others rarely wish to finance our journeys of self-discovery). It's Lahiri's right to give that up and to move on to new things. But we admire--reward--pay for--the rarer skills.

"Gifts" are gifts precisely because they're not chosen.
Posted by Flavia at 10:23 PM 8 comments: