A place for everything means a damn lot of places

Because I'm now an old person, I spent my birthday cash on some incredibly practical, incredibly unsexy items that nevertheless sent me down some strange nostalgic by-roads. You see, I bought two more bookcases and a second 4-drawer filing cabinet to match the existing ones in my home office.

The original items have been with me a long time. When I graduated from college and moved into my first apartment, my parents took me to Ikea and bought me two full-sized bookcases (and a bed, but that's long since gone the way of all particle board), which remained my homes' most distinguishing feature for years. Initially I labored to fill their shelves. Later, in another studio apartment in another state, my expanding book collection testified to my status as a grad student. I bought two matching half-sized bookcases, wedging one in front of a radiator because I was out of wall space. That's also how my filing cabinet--a previous birthday splurge, which I guess means I've always been old--wound up next to the fridge.

Eventually the lot of us moved to yet another studio apartment, the former living room of a formerly grand Harlem brownstone. An elaborate Victorian fireplace sat in the center of the longest wall and my four bookshelves fit perfectly to either side. Around this time I ran out of space and started shelving books horizontally. Then I got my first job and the bookshelves and I moved upstate--and the acquisition of a campus office helped relieve their burden. Once again they fit perfectly along my living room's longest wall, and from the street below I could look up and see nothing but books. It was pretty much exactly what I'd fantasized about at twenty-two. 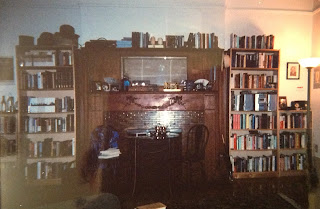 Even a space alien could tell you this apartment belonged to a grad student
By the time we bought our first house those Ikea shelves no longer seemed nice enough to serve as our display bookcases, so we bought others, and I squeezed the old ones into my tiny home office. Now, in another house in a third state, the original four fit comfortably enough that I need new ones to fill out the room. They aren't the handsomest things, but they're big and sturdy and unobtrusive, and every time I plunk down on the floor to reorganize my bookshelves or sort my files I remember all the other times I've done the same and how consequential it felt.

I still love my books; there's a reason they're the focal point of our living room and that we removed the enormous bracket the previous owners had installed for a flat-screen t.v. And I still have an evangelical conviction that life is better when all papers are filed away tidily and ready to be retrieved at an instant's notice. But if those things remain bound up with my sense of self, they're no longer a pledge to the future--a willing of that self in to being--in the way they once were. Every new book used to feel like a statement about myself, and I can still see the angle of the late-afternoon sunlight in that first apartment as I sat on the edge of my bed and inscribed my name inside each volume, just as I remember staying up until 2 a.m. with folders and tabs strewn across my grad school apartment as I imposed order upon the miscellaneous papers that until then I'd been hauling around in file boxes and milk crates.

I don't wish to go back to a time when everything signified so very deeply, but I enjoy thinking about how continuous this self is with my younger one.

What I'll enjoy much less is moving all this crap the next time around.
Posted by Flavia at 11:56 PM 3 comments:

Email ThisBlogThis!Share to TwitterShare to FacebookShare to Pinterest
Labels: I Grow Old I Grow Old, Personal Shit, Rage for Order

Today I learned the answer to life, the universe, and everything.

But I won't spoil it for the rest of you. 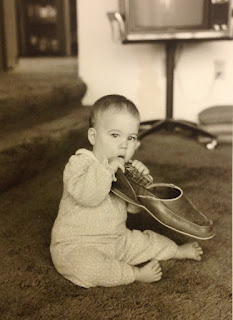 I'm finally done with the Essay of Doom (now less doom-filled!), or at least done until I hear otherwise from my editors. I'm happy with it overall; it makes a modestly new argument, linking my older work to some of my newer interests, and it was fun immersing myself in texts I didn't previously know well.

But because I had the brilliant/moronic idea of starting a work diary last semester in order to keep my writing on track, I'm chagrined to report that I know exactly how many hours it took me to write this 8,000-word essay. And it was. . . um, a lot of hours. Like, more than 200 hours. In fact, as of today, it's taken me 233 hours.

Now, it's one thing to know that this essay is virtually the only thing I worked on for four and a half months--after all, it's a teaching semester! sometimes I write almost nothing while I'm teaching!--and another to have a virtual timeclock read-out showing just how much writing I did and how few words I have to show for it.

I've recognized for a while now that I'm not an outlier, or one of the field's super-producers, but I've been perfectly happy imagining myself somewhere in the middle of the pack of my peers. Recently, though, I've been wondering if even that is true. Not so long ago someone praised my work with a counter-argument-anticipating opening I hadn't known that it needed, saying something to the effect of "though her work is not notable for its quantity, every piece is exquisite."

And while half of me was all, "I'm exquisite!" the other half was like, "hold up now." Between that and this blood-from-a-stone essay, you can see why I might be developing a complex.

For the moment, I'm not interested in debating whether any of this is objectively "true"--that is, whether 233 is or is not a lot of hours to spend writing one essay, or whether my overall writing pace is slower than average or my productivity lower. Let's just presume that I am a slow writer, at least in the sense that I find writing slower and more painful than I'd like it to be.

If that's so, then what follows?

First, and most obviously: I need to allow myself more time than I think I'll need. This is the first time in my life that I've really blown a writing deadline (which might be a sign that this was just an unusually tough project for reasons that couldn't be anticipated), but there's nothing that makes me feel shittier than defaulting on my responsibilities.

Second: I need to be deliberative about what I take on. In the past year or two I've suddenly started Having Ideas--by which I mean, ideas for things that aren't my current academic book project--but if even side projects take a lot out of me, I need to be smart about what I commit myself to.

Third, and relatedly: if I do want to do a bunch of different things, and if I'm both slow and bad at juggling them--heck, I can't even keep this blog going when the writing chips are down--I need to figure out a way of making that work. (You may recall that my work diary was originally intended not just to keep me writing during the semester, but to keep me writing on multiple projects simultaneously. That second part didn't happen.)

Other than that, I don't know. I don't yet have a clear strategy for which kinds of projects I want to prioritize, or how to manage a bunch of them, but something has to change.