(Note: I do not always follow my own advice.)

Cosimo and I are in NYC for all of 36 hours--just long enough to catch Mark Rylance in Jerusalem, hit the McQueen show, take advantage of Restaurant Week, and grab drinks with a few friends--before flying to Prague tomorrow night. (I know! I'm glamorous like that. We tear up the Long Island City Howard Johnson.)

I'm unlikely to be blogging while abroad, but it's conceivable that I might be tweeting. I haven't been impressed with Twitter to date, but all the fuss about the boring Google+ made me wonder whether I might be missing something. So I signed up. If you long breathlessly to follow my every move (or, let's be honest: a few very occasional, selected examples of my moves), check out the sidebar or add me to your designated twitsters.

It may all be a terrible mistake. But you'll get to say you were there! Catch ya on the flipside.
Posted by Flavia at 2:55 PM 1 comment:

When I started looking at houses, I noticed that a lot of the real estate listing for homes I was interested in included some variation on the phrase "nice city home": charming city home, perfect city home, etc. It didn't quite seem to be a euphemism, but more of a necessary descriptor: "a house, but in the city! If that's the kind of thing you want."

Most of the time, when people talk about living in "cities"--and especially about the difficulty of living in cities or the impossibility of raising kids there and so on--they seem to imagine that they're talking about living in apartment buildings. Not necessarily apartment towers, but places where you're schlepping up a lot of stairs or contending with an elevator, where it's an expensive pain in the ass to have a car.

But living in a city does not mean living in the urban core, which isn't where most of the housing in most American cities is anyway. A lot of city neighborhoods involve single-family homes on leafy streets. They may be sited pretty close to one another and they may not have private, covered parking--but they have porches and backyards, attics and basements, and more than enough space to raise a family. They've got the benefits of the suburbs, in other words, while also being walkable and neighborly, with shopping and dining nearby.

And if "city homes" in your particular city are anything like those in mine, they're half the price of homes just a mile away, in the technical suburbs. They're also, probably, handsomer and more architecturally interesting.

So in many ways, "city home" seems code for "a nice house as long as you don't care that the city schools suck." Except, at half the price? I've done the math. I could buy a city house, send two kids to the local (highly-rated) Catholic school for all four years of high school, and still be ahead financially relative to someone who bought in the suburbs. Actually, I could send two kids there for junior high and high school.

But it's not just about the schools. Ultimately, city living means "economic diversity": there are people who don't keep their houses up, or renters with innumerable family members coming and going. There are people on the street at midnight--heading home from a bar or restaurant or just from visiting their friends--who have loud conversations under your window. Your neighbors have friends who honk, repeatedly, rather than ringing the doorbell or using their cell phones. And let's face it: there are more potholes, crappier post offices, and generally poorer service.

And I guess most bourgeois don't have a high tolerance for economic diversity and a lack of sufficient buffering from the lives of others (I also think that many people who insist that there's so little space in the city do so somewhat disingenuously, as a cover for a resistance to city living that has more to do with class and race). But it's still hard for me to understand, because I can't imagine wanting to live anywhere else. I love that I'm out in public and yet in private when I'm having a drink with a friend on my front porch. I love that the neighbor kids play basketball in the street and in my driveway, and that when I'm outside or when the windows are open, I can hear snatches of conversations from several different houses. (I even kinda love the young woman across the way who has shouted cell-phone arguments while sitting in her car with the windows rolled down.) I love that this is a mixed-race neighborhood. I love that I can walk to a couple of bars, a barbeque joint, and a pizza shop--as well as a store specializing in exotic reptiles.

I moved scarcely more than a mile, from a neighborhood with more apartment buildings than single-family homes. But somehow, in acquiring a house and a porch and a yard, I moved more decisively into a city.
Posted by Flavia at 9:51 PM 17 comments:

It's worse, somehow, than "URGENT! PROBLEM!!"

Maybe I should be pleased to open my inbox and see an email from a former student with the subject line "Platonism." But I'm not. I'm just not.
Posted by Flavia at 12:51 PM 7 comments:

The life of the mind owes back taxes

I underreported my income on my 2009 tax return. It was money from an external research fellowship, and I both realized and didn't realize what I was doing.

When I'd had fellowship income in the past, I'd tried to report it but had nearly always had a difficult time doing so: I wouldn't receive tax forms from the granting institution in January, and when I'd call they'd persist in not sending me tax forms. Twice I was referred to an office with a phone line that was never attended and on which I couldn't leave a message. Upon digging through my award notifications, I would also find ambiguously-worded statements such as, "this may or may not count as income and may or may not need to be reported to the Internal Revenue Service."

Nevertheless, I dutifully but half-assedly reported the income. Since I hadn't received a 1099 form, I didn't have a tax I.D. number or a proper address, but I listed the dollar amount and some version of the institution's name. And every time, I owed a chunk of money for my pains.

Based on this lackadaisical institutional reporting, I more or less came to the conclusion that fellowship income must not really need to be reported. The institution that awarded me a fellowship in the winter of 2008-09 also did not send me a 1099 form, and this time I didn't bother to try to track one down. Their checks and check receipts had suggested that they were deliberately underreporting what they paid me, so I figured that if there was a tax loophole here, they were definitely taking it.

When I got the notice of underpayment from the IRS this past spring, I acknowledged its justice: I owed $1,000 in back taxes, plus $37.00 in interest. I wasn't happy about it, but I knew that I was the one at fault. I called the IRS immediately to see whether I could pay in installments over the 90-day window I was given. They told me that I could, and I wrote a check for $350.00 that night.

But it didn't turn out to be so easy. The Treasury Department has been cashing my checks and then, a week or two later, cutting me checks for the same amount (plus interest!): "OVERTAX REFUND," they tell me. I kept sending them checks, for increasingly large amounts, until last month I paid the full $1,037.00 in one lump sum. Last week I got a letter by certified mail telling me that I was delinquent in my repayment. I called, and was told that it was probably an error, since my account had been credited. Yesterday I got a refund check for $1,037.91.

Graduate school did nothing to prepare me for this.
Posted by Flavia at 10:15 AM 11 comments:

Cocktails + fireworks: what could go wrong?

I've been spending every available moment this holiday weekend on my new front porch. Since we seem to need to go to the TargetHomeDepotPlex approximately every 29 hours and since I have an extremely overdue book review that I'm determined to get done before Tuesday, it hasn't been quite the all-day-every-day affair that I'd like. But still: there has been grilling. There have been cherries and berries, newspapers and novels, watering the plants and watching the neighbor kids play in the street and wondering WTF is up with that cop car that keeps circling. And most importantly: there has been drinking. 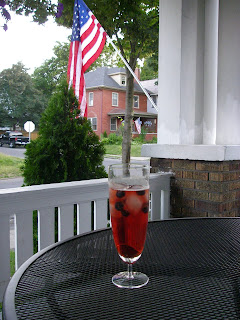 Celebrate it with me, kids: your independence from crappy beer and cheap white wine!
Posted by Flavia at 7:45 PM 2 comments: