What I did on my summer vacation

Or: wheels within wheels

It's a well-know phenomenon: the way that, when you're deeply engrossed in one project, everything you do and read and encounter suddenly seems totally relevant. And indeed, nearly everything I read within my field this summer--no matter how far outside my subfield--got fringed with Post-It flags and incorporated as citations or sometimes entirely new paragraphs within my manuscript.

But as the summer wore on, I kept having that tingly feeling that I was encountering super-important, majorly relevant stuff . . . even when whatever I was reading or watching or doing had no possible connection to my book.

And so perhaps my real project this summer wasn't the book so much as a personally and intellectually coherent life, one in which everything felt connected in meaningful ways (though I'm not sure I can articulate all of them).

Forthwith, then, the stuff what I done this summer:

Came up with a new title and organizing principle for the book, as well as a new way to frame its topic

Reviewed one book MS for a publisher

Got a contract for an edition I'm co-editing

A couple of friends' essays- or chapters-in-progress

Eve Sedgwick, Epistemology of the Closet

Productions of Coriolanus and Fences

Evey and her band rocking the farmers' market

Went to California twice, first to see my grandmother and then for her memorial service

Spent a week in New England

Met Cosimo's family, as he met mine

Had one of my closest friends move away

Saw old friends in Boston and New York--and ended the summer with a long lovely visit from Bert this past weekend.

My classes start tomorrow. I'm not remotely ready. But boy, was it a glorious summer.
Posted by Flavia at 4:52 PM 9 comments:

As of last week, I reside in a two-feline household. (As of today, they're still separated, but I think things are improving.)

Allow me to introduce Schwartz: 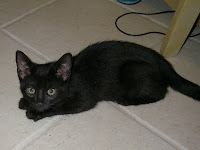 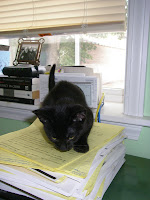 As a reminder, this is my preexisting cat, Nero.

I think that answers my student's question about what kind of infernal creature I am, don't you?
Posted by Flavia at 2:23 PM 15 comments:

I haven't yet seen Julie & Julia, but this passage from David Edelstein's review pretty much sums up my feeling about Nora Ephron's romantic comedies--and, really, romantic comedies in general:


Julie's character doesn't even track. She’s referred to as a "bitch," but all we’ve seen is the patented Ephron adorable klutz. . . . Ephron should make a film about the person she herself is (smart, acid) instead of the cutie-pixie of her dumb fantasies.

I had a version of the same complaint about Zooey Deschanel's character in (500) Days of Summer. I actually quite liked the movie, and I realize that the story is told from the male character's point of view and that Summer is meant to be somewhat inscrutable--but she wasn't a character so much as a collection of quirky habits and odd-ball interests: an indie-rock cutie-pixie, but still a cutie-pixie.

This seems standard in contemporary romantic comedies: even when the movie is focused on a female character--and how often is that, really?--she's seldom very interesting. That a female character might have an internal life is rarely suggested, and if she's assigned as many as two different motives, it's only when the movie needs those motives to conflict in obvious ways to propel the plot forward. By contrast, the male characters may be depicted as neurotics or assholes, but they're interesting neurotics or assholes.

But maybe I'm watching the wrong movies. What recent comedies have you seen that have featured smart, funny, fully-realized female characters? (Please note: "recent" = since Flavia was in high school.)
Posted by Flavia at 12:08 PM 19 comments:

A reader sent me the link to Craig Fehrman's recent essay in College Literature, "Prepreprofessionalism: Rankings, Rewards, and the Graduate Admissions Process" (behind the Project Muse firewall). Fehrman's central argument, based on a couple of years trawling through graduate admissions websites, message boards, and wikis (better you than me, Craig!), is that although much has been written about the professionalization that goes on in graduate school, the process is one that actually begins much earlier.

What Fehrman calls prepreprofessionalism is visible in the applicants, some of them still undergraduates, who already have a focused area of study, a preferred theoretical approach, and an awareness of the job-market exigencies that they believe make such intellectual and rhetorical tailoring attractive to admissions committees (by convincing them that they, the applicants, are focused and motivated and ready to hit the ground running).

Anyone who has met recent graduate-school applicants knows that this is true--and those of us who advise students considering graduate school probably recommend at least some of these behaviors (don't write a statement of purpose that natters on about your love of literature; do show that you're interested in doing work in a particular area and that your interests are a good match for that specific department and faculty). But I'm quite sure I'd never thought about this as part of the professionalization process, and neither had it occurred to me that it could be a bad thing.

To be sure, Fehrman does not assert that it's either good or bad; he works hard to avoid the moralizing that attends most discussions of preprofessionalization (either it signals the death of the life of the mind! or it's the only way these kids will get jobs ever!). But reading his article, which is peppered with excerpted message-board posts from strung-out would-be graduate students obsessed with department rankings and looking for every possible competitive angle, is enough to bring out the curmudgeon in almost any reader: graduate students should be trained broadly! They should be open to changing subfields entirely! (And they should GET OFF MY LAWN!)

I'm generally in favor of professionalizing graduate students--not because I think they're DOOOOMED otherwise, but because I'm impatient with the gauzy, romanticized notion of the humanities that is often presented as the alternative (and also because I support an understanding of our profession as a profession: a creative and rewarding one, to be sure, but one that benefits from generally-accepted standards of evidence, rules of comportment, and the like). And yet, Fehrman's article inspires me to just that kind of guaziness about how things should be--perhaps because his article doesn't, as it couldn't, track what happens to these message-board-posters once they actually get into graduate school: are their interests really that narrow and targeted, and they themselves such hyperprofessionalized automata? I hope not, but I also rather doubt it; nothing rids a person of the belief that she has the key to success faster than graduate school.

But wise readers--especially those of you with more recent experience with graduate school admissions than I--what do you see and what do you think?
Posted by Flavia at 11:42 PM 18 comments:

Email ThisBlogThis!Share to TwitterShare to FacebookShare to Pinterest
Labels: The Academy

Many are the ways of sucking

Apologies for the unannounced hiatus--I had a couple of posts brewing, but not yet fully thought through, when Cosimo and I left for a week with his extended family in New England.

Our cabin in the Maine woods, less than a quarter-mile from the beach: 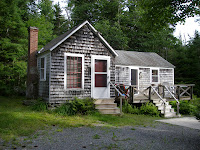 (One of my friends in Boston said to Cosimo, upon meeting him and hearing how we'd spent the previous several days, "You took Flavia to nature?" Yes: and nature survived.)

But because it's August and crunch time, I brought work with me: a book manuscript I'm reviewing. I read half the thing the day before we left, in a splendid blaze of productivity, and the other half in dribs and drabs in the car to and from our various destinations.

It's a collection of essays on a topic of immediate interest to me, so the task was worthwhile even though the essays themselves varied widely in quality. Having just read a dozen pre-publication essays, though, I now consider myself in a position to give advice to essay-writers everywhere.

So! Among the things I would strongly recommend you not do, especially if you have any regard for your future reviewer's travel companion, who may not be wholly interested in hearing her exclaim about the iniquities of your essay for miles on end:

Seriously, dudes. I know we're academics, and thus inherently self-involved--but please try not to appear that way.
Posted by Flavia at 11:40 AM 4 comments: