The view from here

In case you're wondering what I've been up to: 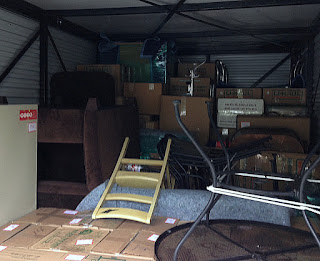 Given the vast suckage of time, energy, and will to live that every move involves, this one has actually gone pretty smoothly. Our local real estate market is both flat and cheap, but we got a strong offer (breaking six figures!) within three weeks. And since our buyers are taking advantage of several first-time home-buyer programs, they wanted a slow, leisurely close--and so did we. As of a week ago, we were still holding dinner parties and hosting overnight guests.

But all good things must come to a screeching halt, and the last week kinda sucked. Moreover, the suck has a long tail: since we can't quite afford (and didn't want) to buy a new home immediately, our move will be a multi-stage affair. About 70% of what we're moving is going into storage for a year (that's what you see above) and the rest is going to our existing apartment, which will then need some serious purging and rearranging. Some of the inferior and temporary furnishing there will remain, but we're swapping in a few clearly superior items, like our bed and our dining room set.

And then there's my campus office, which includes my entire scholarly book collection and which will require a dedicated campus-to-campus trip without passing go--or, more to the point, without lugging everything first up and then down four flights of apartment-building stairs.

But that's okay! Once it's all done, it's done.

At least until next year.
Posted by Flavia at 7:30 PM 8 comments:

One is silver and the other gold

As I move out of the region where I've lived for the past nine years, an old friend is moving back in. Evey was my first friend in Cha-Cha City. We moved here at the same time, both starting tenure-track jobs, both in long-distance relationships. Her best friend from grad school was a reader of my blog, and she set us up. She thought we might like each other.

But after a few years, Evey got a job at her partner's institution. We kept in touch and managed to see each other almost once a year, but getting together was tricky: we lived a long day's drive apart, in places that neither of us had any other reason to visit. Then this spring Evey and her spouse got offered jobs at a university an hour away. Last week we had dinner with them; this week, she's having dinner with us.

This has all been a little disorienting. On the one hand, I'm sad to be moving just as she's returning. But we'll still be much closer than we've been for ages, and we'll each have reason to pass through the other's city multiple times a year. I never expected to have that kind of proximity again.

I've written before about how tough academia is on friendships: though other highly-educated professionals may move for work and may live far from family, it's rare for them to move to a place where they know literally no one--and rarer to do it past 30, and rarer still to keep doing it. Moreover, academics tend to move to communities that don't have a lot of transplants, where the natives have deep roots, and where it's hard to form friendships with people who aren't themselves transplants.

I hate that my first in-town best friend moved away, and that I'm now moving away from my second. I hate that one of my favorite colleagues left, and that I'm leaving two or three others. It took almost nine years to build the social circle I wanted here.

But maybe grumbling about all the friends I'm leaving--or who left me first--is the wrong way to think about it. Had I not moved to a random city where I knew no one, I'd never have met most of these people in the first place. And if I weren't moving to Cosimo's city and hadn't already been living there part-time, I wouldn't have the few burgeoning friendships I have there, or whatever other friendships I may later develop.

A few years ago everyone I knew was buzzing about this article on the difficulty of making new friends past a certain age. The argument is that at some point in our thirties we're all so busy, and have such well-established lives and routines, that even when we really hit it off with someone new it's hard to escalate to the kind of intimacy we might have developed in our twenties, when our lives were less structured.

The argument makes sense, and I'd be lying if I said there were no people I saw as missed friend opportunities--but that's always been true. More to the point, I'm a forty-year-old introvert who's never stopped developing close friendships, perhaps because the vagaries of the academic job market have forced me to it. And mostly I've made friends with other academics: other transplants, other people with shallow roots. When everyone lives hours from their closest friends, they're definitely still in the market for new ones.

In some ways, then, academia might be said to foster the building of new friendships well into adulthood. In addition to having very little control over where the job market sends us, we're constantly meeting interesting new people at conferences. And conferences are basically incubators for intense interpersonal connections. Like sleep-away camp or like a college dorm, conferences pluck us out of everyday life, deposit us into a closed and artificial environment, and leave us there, face to face, for 16 or more hours a day.

Every conference I come away having fallen a little in love with at least one new person--or having deepened and reaffirmed my existing love for two or three people whom I see only at conferences, but whom I inevitably wind up talking to late into the night, or over a long lunch or coffee break. And as at camp, intimacy comes fast.

So though I'm still mourning the people I'm leaving behind, I'm going to try to have a better attitude about academia and what it does to friendships.

Since my Italian tutor is away this summer, I've been working my way through a collection of short stories, a few pages a day. At the same time, my research has taken a turn that means much of the scholarship I need is in French. So I've been reading an article here, skimming a book there. Eventually, I also have to read a long scholarly essay in Italian. (It's been sitting in a file drawer for two years. I like to think I'm working up to it.)

This is a pleasant turn of events. Though my research has certainly required foreign-language knowledge before now, studying the literature of seventeenth-century England means that I don't need it that often, and certainly not to the degree that an historian or a comparativist of my period might. Ninety-five percent of the time, when I call upon my French or Latin or Italian "skills," I'm just double-checking someone else's translation. That's important to be able to do--to see where a translation is imprecise or where there might be a pun or ambiguity in the original--but it's not high-level stuff.

Reading scholarship in a foreign language is more complex. On the one hand, interpretative nuance can be hard for someone of my skill level to follow. On the other hand, it's still a deeply familiar genre and the usual rules of scholarly due diligence apply: I skim to find the key ideas and the major claims, slowing down only when something seems truly interesting or immediately relevant. And as with the English-language scholarship I dredge up, at least 50% of it isn't that relevant.

This also doesn't require anything close to fluency, but it's still gratifying to feel that a whole new area of knowledge is opening up. I've always wanted to read Dante in the original, and maybe I will someday--but I can read Dante in translation. A scholarly article on some minor motif in medieval romance? No one's translating that shit.

Maybe my third or fourth book will involve a direct engagement with Continental literature, and maybe I'll eventually have a fuller appreciation of stylistic, syntactic, and poetic virtuosity in a language other than my own. But for now, having a working sense of the wider scholarly conversation feels like achievement enough.
Posted by Flavia at 1:00 PM 4 comments: