"Memory is the sense of loss, and loss pulls us after it."

While on vacation I re-read Marilynne Robinson's Housekeeping, which I first read years ago and remembered loving but of which I'd had no clear memory. It's a wondrous book, possibly a perfect one, built more like a poem than a novel. Here's a taste:


Cain murdered Abel, and blood cried out from the earth; the house fell on Job's children, and a voice was induced or provoked into speaking from a whirlwind; and Rachel mourned for her children; and King David for Absalom. The force behind the movement of time is a mourning that will not be comforted. That is why the first event is known to have been an expulsion, and the last is hoped to be a reconciliation and return. So memory pulls us forward, so prophecy is only brilliant memory--there will be a garden where all of us as one child will sleep in our mother Eve, hooped in her ribs and staved by her spine. (192)

The book is also a better and more affecting meditation on loss than Didion's Year of Magical Thinking (which I read and liked) or any of the other recent memoirs of grief (most of which I've read only in long excerpts). This is Robinson describing what the rest of us might call, with clinical ugliness, "obsessional thinking"--the inability to let go of the past or the people in it:


[H]ere we find our great affinity with water, for like reflections on water our thoughts will suffer no changing shock, no permanent displacement. They mock us with their seeming slightness. If they were more substantial--if they had weight and took up space--they would sink or be carried away in the general flux. But they persist, outside the brisk and ruinous energies of the world. (163)

But in fact, it's not really grief Robinson is writing about so much as the human condition: transient and marked by loss and hopeful of an escape which is also a transcendence. That's what's wrong, I think, with so many memoirs: they assume that their particulars are, if not universal, at least of universal interest--while not actually being able to capture the truly universal or imagine anything beyond the author's own experience. Maybe that's only due modesty, when the subject is oneself. Maybe fiction is a better place for reflecting on how personal pasts intersect with national ones, or for making claims about the human condition.

Those who have been reading me long enough may have divined that my only real subject, my only real obsession, is how we make meaning out of the past and how we grapple with our sense of loss (past, present, or anticipated); it's probably why I blog, and it is, after a fashion, the subject of almost all my scholarship. So maybe I'm a peculiarly ideal reader for this novel. But if you haven't read it, do. And if you haven't read it recently, read it again.
Posted by Flavia at 11:34 PM 3 comments:

Email ThisBlogThis!Share to TwitterShare to FacebookShare to Pinterest
Labels: Leisure Reading, What Do We Do About the Past?

I'm dreaming of a white-sand Christmas

My parents now live in San Diego county, in a small beachfront town. I can't tell you how awesome it is to spend an afternoon in late December walking barefoot through the surf with the sand pipers and the pelicans while the surfers leap waves and the Marine Corps helicopters swoop overhead.

I see your white Christmas, and I raise you. 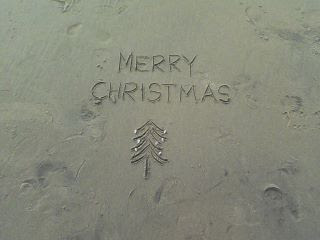 Being a Christian means vaguely feeling some things are wrong

This ad by Rick Perry has been getting a lot of outraged attention and a lot of ridicule:

(For a great round-up of parodies, see here.)

Perry's homophobia--and the fact that he's directing it, specifically, at the men and women who are protecting and sometimes dying for our country--is the obvious and appropriate target for most of the outrage. But I'm equally as offended by his vision of Christianity. Let's take a closer look at what he says: "[Y]ou don't need to be in the pew every Sunday to know there's something wrong in this country when gays can serve openly in the military but our kids can't openly celebrate Christmas or pray in school."

In other words, you don't have to be making any effort to lead a Christian life (going to church, wrestling with what's in the Bible, performing works of mercy) to call yourself one. Proof of your Christianity comes from your vague belief in traditional, religious values--which, ideally, someone else should be responsible for teaching. After all, if the principal of your kids' school leads them in prayer and there's a big crèche in front of City Hall, then you don't have to do any religious instruction of your own, much less model a life of faith for your children; you can just rest secure in your own rightthink.

Also, if you're uncomfortable with gay people? That's okay, because it proves you're a Christian! In fact, if you're uncomfortable with anything, that's probably because it's wrong. And wrong in a cosmic, Bible-forbidden kind of way. (Which is why, as I've noted before, so many Christians don't actually read the Bible: they already know that everything they believe is in there.)

According to Rick Perry, being a Christian means being part of a very special and persecuted minority on whom no real demands are ever made.
Posted by Flavia at 2:19 PM 25 comments:

Email ThisBlogThis!Share to TwitterShare to FacebookShare to Pinterest
Labels: Politics, RCC--Yeah You Know Me, Religion

Resisting the urge to stage mom

This semester I've been directing two independent projects: one M.A. thesis and one undergraduate honors thesis. It's my first time directing a thesis of any sort, and though I've been a second reader on at least half a dozen--and in some cases got pretty intimately involved in the project--being this up-close and personal with another person's thought process has been interesting.

On the most basic level, it's hard to guide usefully without guiding too much, and it's hard not to be disappointed when a smart student nevertheless doesn't quite get what you're saying or go as far as you think he or she could go. I spent a lot of time talking ideas through with both students, trying to help them to recognize certain connections that they seemed to intuit but couldn't quite express--and in both cases it was mildly frustrating to lead them right up to an idea and not have them able to make the final leap on their own.

That's fine, of course, and they both did some good work; when it comes right down to it, a thesis is more a skills-building exercise--a demonstration of growth and mastery--than something that needs to be lovely and perfect in itself. (God knows, this is how I came to see my own graduate seminar papers and to some extent my dissertation.)

So yes: it's satisfying to see students grow and improve and I certainly point out to mine the places where they've grown and improved and I tell them what I'm pleased with. But when you're interested in the project and you've got a restless, tinkering mind, it's hard to know what's good enough, or what's sufficient improvement, when it's somebody else's life and work.

Maybe this is what it feels like to be a parent.
Posted by Flavia at 8:10 PM 6 comments: