I'm now more than halfway through my Folger seminar, and though, as noted, it's kicking my ass, it's also been terrific. This particular seminar skews young, with faculty accounting for only two of the ten participants (or, as I prefer to call them, "seminarians"), but it's an energetic and exciting group, well-balanced in terms of disciplinary background: five historians, four literature scholars, one philosopher. And even within those groups there's a lot of diversity: we range from the sixteenth through the eighteenth centuries, working on different genres and kinds of documents, with a gender historian, an archivist, and a musicologist in the mix.

It's surprising how rarely I see the thought processes of people in different disciplines, even those in closely allied fields. I read a lot of historiography, but I read it in the service of my own work. This means that I focus on the bigger-picture stuff rather than dwelling on, say, how the data were collected or what the author's methods or assumptions might be. (And of course, any published work, to the extent that it foregrounds a narrative or an argument, at least partly obscures the process of its research. If you're not trained in the relevant field, it's easy not to think about how the sausage gets made.)

Now, this exposure doesn't mean that I'm going to start crunching the data in baptismal records or churchwardens' reports or whatever. I hope now, as I always have, that some of my work might be useful to historians, but even when I think I've made a minor historical discovery (as in this essay), it's always done in pursuit of a literary argument. And since I'm not writing for historians, I can't predict which parts they'll find interesting.

Still, having a better sense of how historians attack a particular problem and becoming more conversant in their disciplinary debates has been tremendously useful. And thinking harder about someone else's disciplinary norms has made me more conscious of my own--of what we mean by literary scholarship: how we mount arguments, what counts as evidence, and what the payoff should be.

As for the benefits of this seminar for my own work--well, I'm early enough in this book project that I can't yet fully ascertain how it will influence its shape, though I have faith that it will: most of the things we learn disappear soon afterwards, or seem to, with only the occasional fact or detail surfacing as needed. In reality, the process of learning continues, like a subterranean stream moving steadily beneath the surface. I have a hard time pinpointing what I "learned" in many of my graduate seminars beyond the specific texts I read or the papers I wrote. But they produced habits of thought, assumptions, value systems--what kind of things are worth looking at, what kind of questions are worth asking--that shape my scholarly method today.

It's a different experience, though, than the last faculty research seminar I participated in, which came toward the end of my first book project. In that case, when a particular discussion reoriented my thinking, I knew it as it was happening, and each time it felt like a bomb going off. This time I'm just accreting small revelations and minute changes to my thinking, which are like brief flashes of light at the edge of my field of vision. What do they signal? Are they important? Will they add up to something?

Email ThisBlogThis!Share to TwitterShare to FacebookShare to Pinterest
Labels: Influences, Lost in the Library, Midcareer Crises

I've been reviewing more article manuscripts lately, which means I've been thinking harder about the intricacies of "fit."

We all know that some work just isn't right for a particular venue, though some instances of bad fit are easier to discern than others (no one, surely, would submit an essay on Ben Jonson to American Literature). I had one essay that I thought was a good fit for a particular journal that didn't even make it to peer review, and my book manuscript was summarily rejected by as many presses as were interested in it.

I was bad at predicting those outcomes, but I wasn't upset by them: I trust editors to know their audience and their market and to have a better feel for how my work aligns with their areas of strength. As an external reviewer, though, it's a little harder. There are some journals that I know intimately and where I have no difficulty discerning whether a submission fits--or, more to the point, where I know exactly the kind of suggestions for a conditional acceptance, or a revise-and-resubmit, that will help the essay pass muster. But other journals I just don't know as well. I may have a general sense that a given journal is, let's say, a B/B+ venue--perfectly credible, but not a brass-ring achievement--but what does that actually mean, in terms of the minimum standard for a given submission?

I consider argumentative and organizational clarity to be essential, no matter how modest or ambitious the claim, and every essay needs some degree of critical framing. But if the author is making only a small intervention, or is raising an interesting historical context without doing much with it--well, obviously that's not enough for a top-tier journal. But is it enough for Journal X?

Or to put it more finely: if I think the claim is a little lackluster and I push for more, am I doing a service--encouraging deeper thinking and helping to maintain high standards--or am I placing a burden on both author and journal--depriving, let's say, a grad student of a line on her vita that would materially help her on the job market and a journal that might be struggling for submissions of a basically solid if minor contribution?

In practice, a lot of this gets sorted out before an essay ever makes its way to an external reviewer: editors filter out the completely unacceptable; good advisors direct their students to journals they think are a reasonable match for their work; authors have a vested interest in knowing their venue and getting the fit right. I've never had an essay that I truly thought could have gone either way.

But I still worry about this each time I'm asked to read an essay by a journal that I don't have a good feel for, and I struggle to articulate exactly what should count as "good enough" for most journals in the big, broad middle.

Maybe, like obscenity, we just know it when we see it.
Posted by Flavia at 11:42 PM 4 comments:

Email ThisBlogThis!Share to TwitterShare to FacebookShare to Pinterest
Labels: Academic Hazing, Getting It Published

In case you're wondering where I've been:

1) death in the family

3) getting my ass kicked by my Folger seminar 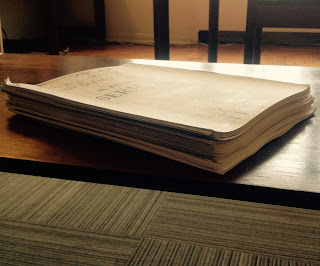 So I've got lots to say but no time to say it. Soon, though. I hope.