There's been something going around the academic blogosphere these past few months, with many long-time bloggers of roughly my generation wondering aloud about the purpose of their blogs now that their professional status is more secure. I've had those questions, too. A lot of us started blogging when we were grad students or were just starting our first full-time academic jobs, when we were growing into our professional identities but still felt pretty marginal. The period of becoming--the story of how one builds a life and fashions a self--is, after all, a traditional subject for narrative.

But now that we're done struggling upward, or have at least hit a significant narrative plateau (and now that we have enough buy-in that we're not going to be writing with complete candor about a specific obnoxious colleague, a gossipy scandal, or a potentially disastrous institutional initiative), then what's the point for those of us whose blogs are mostly life chronicles? Who wants to read about the relatively low-stakes struggles of the tenured?

I don't know the answer to the last question, but I suppose my answer to the first one is that, first of all, the story isn't actually over--and secondly, we were never fully candid and never really that marginal to begin with. Graduate school and the job market may have traumatized us, and we may even have spent a year or two as contingent faculty, but let's face it: those of us who went to fancy Ph.D. programs weren't ever in the belly of the academic beast (though we may have spent some time caught unpleasantly in his esophagus). So if we're more privileged now than we were then, it's only a matter of degree.

My point isn't that only the most marginal deserve our sympathy or have stories worth telling, but the opposite: academia can be brutalizing even for the relatively privileged, and as long as we're not conflating our lot with that of those further down the privilege chain--and as long as we're listening to them, too--writing honestly about our professional lives is a service no matter where we are or how much good fortune seems to outweigh the bad. (That guy we all know who didn't get tenure at Harvard or Yale or Chicago a decade ago, and who retells the story every year at the the conference hotel bar? Yeah, he's annoying as hell. But his story about the profession is a real one too.)

In the comments to my last post, I mentioned that I was striving to write both honestly and ethically: I want to tell the truth, including the emotional truth, of my professional life without being merely emotional and reactive, in a way that maintains the privacy of those who haven't signed up to be blogged about, and also in a way that at least implicitly recognizes my own privilege.

We'll see how it goes. But I'm hopeful that my life post-tenure is still worth writing about, and worth reading.
Posted by Flavia at 9:05 AM 29 comments:

Getting It Published: Part 7

I was hoping that this post would be the final one in this series--to be followed, perhaps, by a few posts on the process of publication itself (from contract to bound copies), but alas: the news from my once-prospective press is not good.

As you may recall, I'd been working with this press for two years. They first sent the manuscript to one outside reviewer, who had stern but encouraging words, so I revised according to her suggestions. They sent it to her again, and she was very happy with my revisions and recommended publication. Then they sent it to a second reviewer, who read the entire MS in three weeks and was highly critical--but he also seemed confused about the basic parameters of my project; he made lots of suggestions, but most of them were, at best, tangential to my topic. I was asked to address "at least some of" his concerns, and I did so to the extent that I felt I could while maintaining the integrity of the project. I also told the press very clearly what I had done, what I had not done, and why.

So after winter break they sent it back to him. . . and after more than four months he submitted a one-paragraph review, most of it cut-and-pasted from his previous review, saying that I hadn't engaged sufficiently with his criticisms.

And that means that's it for that press. The editor was quite apologetic, but explained that such a negative review tied the press's hands and would make it hard for the editor to make a case to the publication board--even if the editor were to find a warmly receptive third reader.

And though I know that this is just one obtuse reader and that this is just one press, I haven't felt this crappy about my scholarly identity since grad school. I've been working on this project, in one incarnation or another, for ten years. At this point, I'm pretty much done. I want it to live somewhere other than my own head. Readers can like it or dislike it, but I want it to be other people's to grapple with, not mine.

I know that it will get published elsewhere, and maybe even at an equally good press. I'm not doubting the project's intrinsic worth, but right now I am feeling pretty demoralized about how goddamn long it will now be before it sees the light of day. And although I knew that this was a risk I was taking by sticking with one press for so long, I'm still surprised by this outcome and I still feel like I've failed. Moreover, being in Italy means I can't do what I'd normally do, which is send out another half-dozen proposals immediately. But I don't have a printer here and I don't have RU letterhead, so all I can do for the next three weeks is stew.

Well, that's not quite true. The silver lining, I guess, is that now I have to get on with the rest of my scholarly life. For the past four months, waiting for this review, I've felt paralyzed, unable to work on the article I'm half done with, unable to start strategizing about the next book (even though I'm excited about both), and unable to do more than desultory work on my scholarly edition. It just hasn't felt worth it, when I knew that I might hear back any day about this book and need to turn quickly to any final revisions.

And to be honest, I've been worried, over those past four months, about whether I was losing steam and losing drive, and maybe becoming complacent (about getting tenure, about the idea of having my book come out with this particular fancy press, and, generally, about all the things I've done rather than being energized by what lies ahead). If my book isn't coming out imminently, well, that feels shameful. But a sense of falling behind or of having something to prove has always been useful to my productivity. Having the book in limbo means I absolutely have to get that article out the door this summer. And I need to start applying for some external fellowships, maybe even a few big ones, in order to write the first couple of chapters of my second book and in the hopes of taking a year-long rather than a semester-long sabbatical in 2013-14.

I suppose it will all work out in the end; the race is not always to the swift, etc. But this sure wasn't what I'd hoped to hear.
Posted by Flavia at 8:48 AM 21 comments:

Email ThisBlogThis!Share to TwitterShare to FacebookShare to Pinterest
Labels: Book One, Getting It Published

When you think dumb thoughts you like dumb people

As I struggle along with my Italian here where I'm surrounded by it, I realize what a comfort, what an absolute joy, the boring, the conventional, the formulaic, and the repetitive are. Bad detective shows and their stern, furrowed-browed heroes and bumbling sidekicks? Awesome. I've seen 'em all before. Glossy women's magazines with their rhapsodies over lipstick and dollops of personal-life wisdom? Even better. I love commercials and print advertisements, the stupider the better. (Really bad not-quite jokes? I get them! It's fantastic!)

As Cosimo has observed, the people you'd most avoid if they were speaking your native language--the loud, slow-talking, pedantic ones--are those you're most grateful for when you're trying to work up your language comprehension. Whining children? Pretty great! That guy opining loudly to his buddies outside the tabbachi shop? Also great! Ditto for old ladies narrating their purchases aloud at the supermarket, couples breaking up in public, and angry dudes with bad cell phone connections shouting the same sentence over and over. We went to mass at a local church (itself awesome, since the formulae are the same and lots of the terms are cognates and/or Latin loan words), and I briefly thought I'd been granted the gift of tongues when I was able to follow most of the sermon. But no: the priest was just a tedious young guy, fresh from the seminary, giving a deliberative, repetitive, and essentially theological sermon. It was terrific.

I guess I look forward to the day when I dislike tedious Italians as much as I dislike tedious Americans and Britons. But for now I embrace them. Eloquent, original, and complex thinkers just ain't for me.
Posted by Flavia at 7:26 AM 7 comments:

So we made it to Rome, and with the exception of the mosquitoes, who have given us an overly-enthusiastic welcome, everything here is pretty near perfect: the weather, the apartment, the neighborhood.

If this is how the Romans do it, I'm sold. Check it: 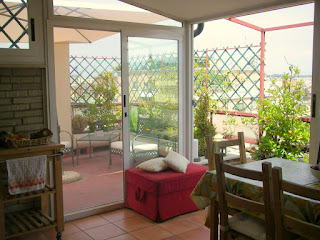 A corner of the kitchen, opening onto the terrace 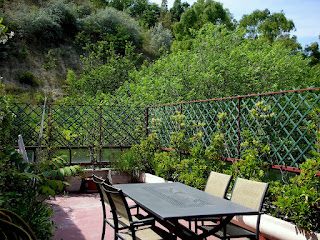 The back of the terrace 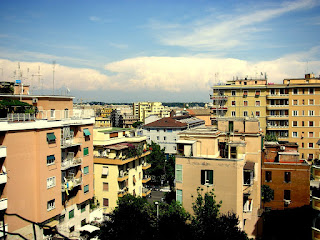 The view from the living room 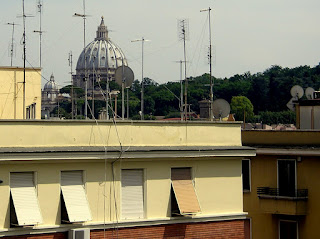 Another view from the living room


So who knows how much I'll be blogging. Unless you're more interested in my adventures in verb conjugation than I imagine--or have a very high tolerance for hearing about bad Italian t.v., the many bottles of wine, prosecco, and limoncello already lining my fridge, or how tiiiired my feet are, there may not be much to report.
Posted by Flavia at 1:22 PM 7 comments: