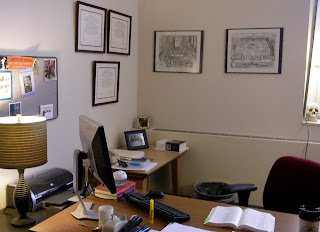 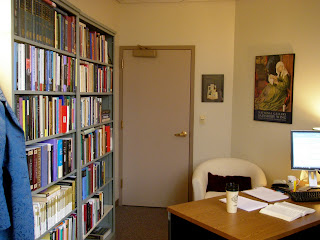 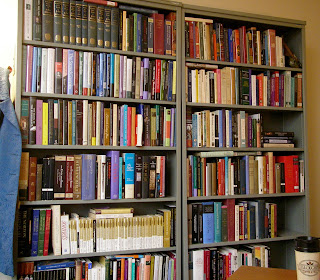 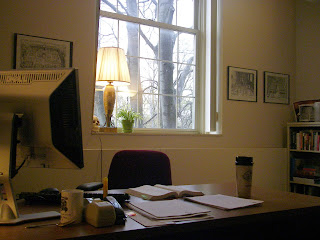 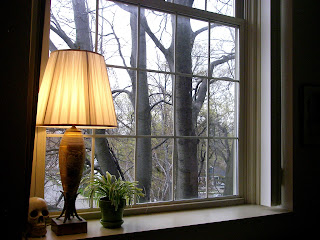 Vimala Pasupathi's recent post about her decision to take an unpaid research leave hit a nerve with me. Vim isn't the first person I've known to do such a thing, but she lays out with candor and clarity the ways that "doing more with less" at the institutional level can force faculty to do the same thing on the individual level: the more our institutions demand of us, the harder it is to carve out space for our own life and work.

Those I know who have taken or are considering taking unpaid leave--or who have sacrificed a chunk of their usual income by foregoing summer teaching or additional advisement or administrative duties--have done so not just in order to finish a scholarly project they were excited about, but also to recover from a toxic workplace, to be with a long-distance spouse, or to compensate for a nonexistent maternity leave. And I am, after a fashion, doing the same thing myself: I'm taking a year-long sabbatical, at half-pay, both to kickstart my next book project and to live with my spouse full-time for fifteen months.

This is a genuine financial sacrifice, but not the world's biggest one: among other things, I've got tenure, so I'm returning to secure employment, a stable income, and a basically healthy, happy institution that hasn't suffered much in the recent financial downtown (in fact, there's now more money available for research than when I started).

But if my sabbatical sits at the cushier end of the self-financing spectrum, it's worth recognizing that it's not entirely distinct from the kind I did when my professional position was far less stable. Indeed, self-financing may be the skill those who go through graduate school in the humanities learn best.

Here's one example: in the last two years of my PhD program, I presented at five national conferences and I paid for them almost entirely out of pocket: I believe I got $500, total, for five conferences, all of which included plane flights and hotel rooms. I remember struggling to find the money--and I shared hotel rooms and economized in various other ways--but it never occurred to me not to do it. I was almost done with my dissertation, and I needed the lines on my vita and the public exposure.

When I started a tenure-track job, I merely scaled up my sense of what I could afford to self-finance: so I got less than $1000/year for research travel? No biggie. I had a real salary! So I went to two or three conferences in one year, or spent two weeks in England working at an archive, and I regarded it as a necessary expense: I wasn't going to let being at a regional state school limit the work I could do, or restrict my opportunities.

Over the years, to eke out an extra conference or a research trip overseas, I've used frequent-flier miles, spent two weeks living in a dorm, eaten sandwiches for every meal, split hotel rooms with friends--but, above all: I've spent my own money. I never even kept track of how much I spent until I got married and got an accountant and realized, holy shit: that's thousands of dollars, every year, to finance my scholarly life. Next year, I'm "spending" more than $30,000.

I'm lucky to be able to do it, all of it. But I wonder what the breaking point is, for me or for the profession as a whole. I've always regarded my self-financing as essential, as an investment, and my position rewards that kind of thinking: all that grad school debt and lost income did in fact result in a tenure-track job; the work I've self-financed since then has been directly responsible for merit raises and indirectly responsible for my getting tenure and promotion and receiving scheduled raises along the way. But I guess it's a fucked-up system that expects--that takes it for granted--that its members will sacrifice and pay out of pocket for the work that the profession requires in order to consider them full members.

Or to put it another way, when is self-financing an investment, and when is it a scam?

This isn't a matter I'd adjudicate for anyone else; I know independent scholars and adjuncts whose work is wholly self-financed, a real contribution to their fields, and done (I presume) out of love and dedication; they can't not do the work they do. But for me, it's worth it because the profession has committed to me. If I left the profession or it left me, I would not keep doing my research.

I love my work. It provides me with a profound source of meaning and much of my current identity. It's taken years to become the scholar I am, and to be as happy as I am, and it would surely take me years to find something equally meaningful. But if someone weren't willing to pay me for it--or for some percentage of it!--I doubt I'd do it.

What's my breaking point? I really don't know. But since next year I'm getting paid half of what my institution normally thinks I'm worth, maybe that's as good a line in the sand as any: I need the profession to meet me halfway.
Posted by Flavia at 1:09 AM 20 comments:

If this is self-selection, I'm all for it

In my current job, it's so rare to encounter entitled, snobbish, self-impressed students that when I do I find myself running to tell my colleagues about this horrifying thing that just happened.

And then I remember: oh, yeah. That's a thing. A thing I almost never have to deal with.

There's lots to love about my job, but the sheer niceness of my students--including the smartest and most talented among them--has to be reason #1.

Email ThisBlogThis!Share to TwitterShare to FacebookShare to Pinterest
Labels: Teaching, The Less-Elite Groves of Academe

I spent last weekend in Toronto at the conference that's finally owning the name many of us have long applied to it--but now I'm back, and I'm crashing hard.

The post-conference hangover (which is not to be confused with an actual hangover, though that also goes with the territory) is a well-known occupational hazard; to judge by my Facebook and Twitter feeds, lots of my fellow conferees are also suffering. I myself spent most of last night in tears for no reason, and it was only in the light of day that I recognized the symptoms. It's hard to jump back into workaday life after a weekend away, and it's particularly hard after three or four days of constant intellectual and social stimulation; I'm always a bit glum and my world seems pokey and disappointing for a couple of days after I return from a conference.

This time, though, I'm not just crashing from a conference high; I'm also processing the conference lows. As the association president said at her luncheon address, the SAA is, for many scholars, their "hometown": the place where they feel most at ease, most fully understood, and most warmly welcomed. It's a lovely description of why professional conferences matter, but it implies (as she went on to say) that the other places we spend our working lives are not as welcoming.

Here's some of what I heard about those other places, in the course of the conference:

-Two of my friends were denied tenure in jaw-droppingly egregious ways;

-Another is in a department that may be dissolved;

-Three more are at institutions that are imploding (one of which may actually go under);

-Other friends and acquaintances spent yet another year fruitlessly searching for tenure-track jobs;

Sure, I've heard such stories for years. And everyone I know who's actually left the profession has found happy, fulfilling work (in many cases, they're happier than those who hung on). But in a year in which I achieved both tenure and a book contract, such stories feel paradoxically more personal. This is really my profession now. And it's not getting better.

When I was in grad school and on the market, I was angry about the shape of the profession--but though it felt like my problem (I was one of the exploited, one of those who might never get a tenure-track job), it wasn't really: the crisis was the responsibility of my seniors, who, if they hadn't created it, were at least ignoring and perpetuating it.

I remember asking my union organizer why the faculty were so opposed to unionization, or why they seemed to believe--in the absence of all evidence--that everyone who worked hard and kept her head down would get a job. She said that maybe it was too hard for the faculty to acknowledge that the system was broken, that it wasn't a real meritocracy, and that they themselves didn't have the power to help or protect us.

That explanation struck me with the force of real truth, and it still does now that I'm one of them. We own this shitty system. We didn't break it, but we bought it.

So while I'm sure my conference stupor will lift in a day or two, I hope it's replaced by something less like paralysis and more like outrage.
Posted by Flavia at 7:46 PM 14 comments: