A work too hard for the teeth of time

Ten or twelve years ago, when I was working on the third chapter of my dissertation, I found a thread, pulled it--and wound up with a heap of flax so huge I'm spinning it still.

It's not something I found on my own, however. I stumbled upon work that someone on the scholarly margins had done fifty years earlier and that had lain neglected since then. My discovery wasn't due to any great perceptiveness on my part; I just happened to come across my predecessor's work when I was searching for a way into a text that had resisted all other approaches, and I happened to have been trained in the right methods and habits of thought to see the opportunities that his work opened up.

Briefly, this is what I discovered: in 1953, Jean-Jacques Denonain, a Frenchman or maybe a pied-noir, produced a scholarly edition of Thomas Browne's Religio Medici (the title means "a doctor's religion" and the work is a long, strange, beautiful essay that might be summarized as a meditation on the relationship between faith and reason). Denonain collated all the known manuscripts and the major printed editions and presented the text in a simple genetic format that showed the work's development over seven or eight years of composition and expansion. 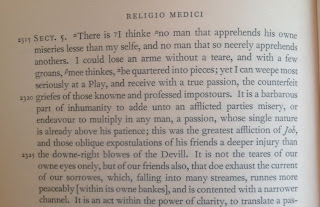 Denonain's presentation of the text and its development (Part II, section 5)
Thomas Browne, Religio Medici, ed. Jean-Jacques Denonain (Cambridge: Cambridge U.P., 1953)
No one else had done this, so it would have been honorable work regardless--but Denonain's big revelation was that one of the surviving manuscripts appeared to represent an earlier and significantly different version of the text than the one that had been familiar for centuries.* But although his edition was published by Cambridge University Press and received at least one laudatory contemporary review, almost none of the subsequent scholarship on the Religio built on Denonain's work.

Several years later he published a complete transcription of just that early manuscript. However, it was in an obscure, French-language venue; after a few nice reviews, it all but disappears from the scholarly record. In the intervening years no one but Denonain seems to have looked carefully at this earlier version and no one wrote a word about it. 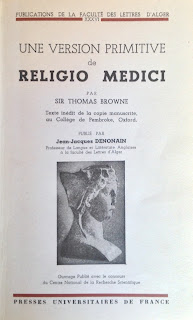 Denonain's transcription of the manuscript held by Pembroke College, Oxford (pub. 1958)
A decade after first presenting my work on the Religio and years after my first publications building on Denonain's work, I'm co-editing a new scholarly edition, my chief contribution to which is my deep familiarity with the peculiar early version that so fascinated Denonain. Indeed, with his (presumptive) death, it's neither vainglorious nor particularly impressive to say that I'm probably the world's leading expert on that manuscript. But though I frequently go back to work with the text in person and have high-resolution digital images of every page, I still keep returning to Denonain's editions and transcription, wondering what more he knew and saw and what he would think about what I've done.

In a sense, he's my ghostly collaborator: the only person who knows this text as well as I do, with whom I feel myself to be in conversation almost daily--but whom I'll never meet and about whom I know almost nothing.

A sense of intense connection with the dead goes with the territory when you work with old documents, but generally, when we discover the work of a previously unknown scholar, we can place him in a coherent intellectual tradition, tracing his genealogy forward and backwards and recognizing a chain of influence: we not only know which school or methodology a particular critic belonged to, but we know who trained him and whom he trained in return. With Denonain, I don't even have a birth or death date.

All I know is that he taught at the University of Algiers through the 1950s but by 1974 was teaching at the University of Toulouse - Le Mirail, which Google tells me was then a new university, one that emerged in the aftermath of '68. In addition to his editions, he published a book on Browne in French, and most of his other scholarship--a book on the metaphysical poets and a handful of articles on the likes of Marlowe and Bacon--is also in French. But he writes confident, idiomatic English and evidently had a deep familiarity with early modern English paleography and manuscript culture. It's conceivable that he was trained in the U.K., but if so, I have no idea where or by whom.

It's sometimes been hard, then, to escape the sense that I'm the only one who hears him, that he was conjured up like a genie or a ghost, to impart a message to me and me alone. I suppose there's comfort in this proof that scholarship really can last--that it can disappear like the river Arethusa only to reappear later in a different place--and that some of what we write might be, as Browne says of the Bible, "a work too hard for the teeth of time."

I realize it's condescending to assume that a Frenchman in Algeria who specialized in English Renaissance prose was necessarily an isolated figure; like me, Denonain must have had collaborators and colleagues, people whom he talked with and grooved on and who spurred him onward. But I'm still lonely for him, in both of the directions that preposition implies.

Email ThisBlogThis!Share to TwitterShare to FacebookShare to Pinterest
Labels: Influences, Lost in the Library, The Writing Life

How utterly fascinating. Years ago I stumbled upon an under-appreciated manuscript (that was sometimes attributed to your guy) and I had a lot of fun reading through the work before handing it off to a student who did nothing much with it. I might someday take another kick at the can because these things get a hold of you, don't they?

I think I can think of people who could help in this detective work! writing to you separately.

Super interesting!! It does seem weird that this scholar left no trace other than his published work. There must be his CV in some old university files or something, right?

Yes, they do! And one of the nice things about being established in one's career is realizing that not everything needs to be done now, and and that things one has set aside or half forgotten may still come back around later.

You're the best. Looking forward.

You'd think. His last published work appears to have been in 1982, though, and I can't turn up anything about him on Google--had been hoping that old students or colleagues might have penned some memorial, named a scholarship after him, or even just name-checked him in their own work. (Though perhaps my French-language Google-Fu is just too weak.)

No I have not! To my shame I've never even been to Norwich. Maybe this summer.

If you go, ask about the skull cast! You may get lucky and a docent will take you back to hold a cast of his skull!

That, and Norwich is a wonderful city to visit. (I have a fantasy of spending more time there.)

This is beautiful. Mostly, I just mutter darkly at mid-century historians of Blargistan. You, on the other hand, are mounting a rescue expedition.

What a fascinating story, and how beautifully told. From another point of view, this is how scholars survive: as the voices heard by the few--or the one--who somehow find the way to their work. I've had many close relationships with dead modern scholars, as well as the dead humanists they (and I) have studied.