The parish that Cosimo and I have been attending in Punchline Rustbelt City feels like a bizarro throwback to the kind of American Catholicism I know only from books and movies. It's not the church itself, though it's a handsome structure with an interior reminiscent of a Gilded Age train station. (Google tells me this is because it's actually built from the pieces of a bunch of nineteenth-century banks and hotels.) Neither is it the congregation, though a big, multigenerational crowd packs the pews every Sunday.

No, it's the fact that there's a whole clubhouse of priests in the rectory. In addition to the white-haired sixty-something pastor (and the two permanent deacons), we have a goofy hipster priest in his early thirties and a jocky twentysomething seminarian. And they have a great rapport with each other and with the congregation. Remember Going My Way? It's like that, but with three Bing Crosbys: warm, personable guys who talk sports and dole out high-fives and fist-bumps to the kids. 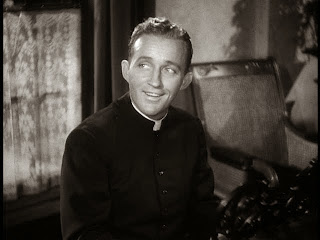 Last week we were told that the two younger men had concluded their rotations and would be moving to new parishes. . . but that in a couple of months we'd be getting another newly-ordained priest, and another seminarian, and a third young priest from abroad. Oh, and an 18-year-old member of the congregation had just entered the seminary, so we should all pray for him.

Except, actually, it's not, and thank goodness: the parish, like the neighborhood around it, is thoroughly integrated, including a number of interracial families. There are women and girls in the sanctuary. And though it's dressier than our home parish--it's easy to spot men in suits and the occasional be-hatted woman--people also show up in sweatshirts and sports jerseys. No one bats an eye either way.

If this is a glimpse of the future of the Church, I'm all for it. (Though for my next course, please, I'd love some female ordination.)
Posted by Flavia at 10:37 PM

Email ThisBlogThis!Share to TwitterShare to FacebookShare to Pinterest
Labels: RCC--Yeah You Know Me

Wow--that does sound like a throwback church. The Catholic churches around here feature mostly international priests (African, European, Phillipino, but interestingly, none from Mexico or Latin America.)

Are your priests Jesuits? Is Punchline Rustbelt City now considered a mission or a hardship post like 17th C China, Canada, or Brazil? (Just askin'.)

No--I'm actually not sure what order they belong to. Part of the explanation seems to be that the pastor is a seminary professor, so he seems to be seen as a good mentor for seminarians and the newly-ordained (every one of them is local, as in born & bred). It's also just a big, lively, vibrant church, and a good place to send someone on a kind of post-doc to get a sense of all different kinds of ministry.

But I also wonder whether parish consolidations aren't part of the story. We're in a merged parish that combines three former parishes (two different physical churches remain in use; the third was shut down). Given that consolidation, a Catholic population that continues a slow decline, and what seems to be a slow but steady rebound in the number of U.S. seminarians and ordinations, maybe some kind of equilibrium is being achieved.

For what it's worth, that sounds like a pretty typical Catholic Church experience in Punchline City - or at least it feels like the churches that I grew up going to on the West Side (and that I've returned to sporadically after leaving town, though admittedly mostly during the holidays).