It's the bleak middle of February. Last weekend my gas oven emitted a fiery whooosh, singeing my eyelashes half off and frying parts of my hairline. Tuesday I came down with what I think is my third full-blown cold of the winter. I'm stressed and panicked about my current writing project as I haven't been about any project in a long time. And yep: today I turn thirty-five.

But look! Here I am at age three, sun-tanned and bearing flowers: 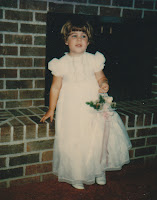 Lemme tell you something about that photo. It may be the only photo to have captured me in the flower-girl getup I wore for my uncle's wedding. I'm not in any of the official wedding photos, and probably not in any of the unofficial ones, either. Because I did not actually participate in the wedding.

Reason one is that I got scared when I saw all the people in the church, and refused to go down the aisle. But reason two is that my uncle's wedding occurred during a several-month window during which I had decided that I was a frog.

I'd declared myself to be various other animals at various times, usually just for an afternoon or a day or two. But I really liked being a frog, and I was a frog for a long time. When I was feeling contrary, I'd ribbit back when people spoke to me. I'd refuse to walk, and hop around on all fours. And at my uncle's wedding, in addition to refusing to walk down the aisle, I hid in the bushes during the photo sessions, insisting that frogs didn't do that.

Happy 35th, sis! Look for something in the mail soon-ish. And I do mean *something*.

Hope your day goes well. I may try to call you mid-morning-ish, if all goes well here.

Happy birthday, brilliant lady. May your year be glorious.

Happy happy happy birthday! May the coming year always be healthier, happier and sunnier than this day!

Love the grenouillean history. Coming soon to a screen near you: *My Life as a Frog*.

HBD! I'll lift a glass eastward the next time I find one in my hand (which shouldn't be more than 10 hours, so it will still be your bd).

Happiest of birthdays! And years to come! And I sort of adore the idea of you as a frog--my imagination along these lines is aided by your not appearing to have aged since you were 3.

Happy birthday, and thanks for the delightful frog story. See what a rich life you've had already, and just imagine how much better it will get!

Many happy returns of the day, Flavia!

Happy birthday! And a very adorable little frog you seem to have been, by the way. Lovely picture!

Many happy returns! And many years! Love the frog story.

Did everyone else reject the obvious pun? I am incapable. I hope you had an extremely hoppy birthday.

Happy birthday, with apologies for missing this when you first posted. (Betrayed by Bloglines; I thought my whole blogworld had gone silent, but Google Reader rescued me.) Anyway, so sorry about the stress, panic, and singeing, but the story behind the picture made my day. That belongs in your first novel, when you write it.

You're learning a lesson of middle age early: it can always get worse! So, you burned your eyebrows and hairline off--it could have been worse! Your whole head might have caught on fire! So, you'll have to visit a periodontist soon--it could be worse! At least you probably don't have to worry about dentucreme.

Always look on the bright side. Or, pretend you're a frog. To me, that sounds like an extremely sensible reaction to a very stressful situation.

Happy Belated Birthday - you're a total cutie-pie in the picture - but I can see you even more clearly as a frog ribbeting in the bushes!

Happy Belated Birthday! Sounds like you were initiated by fire and plague, so this year can only get better!

Happy belated birthday! Bloglines continues to withhold information but I get there eventually. Hope it was a delightful day, free of fire, pestilence and amphibians.